Ethi’Kdo is a non-profit cooperative that offers the first gift card for ecological and solidarity-based stores in France. 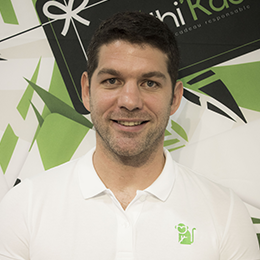 An innovative card for solidarity-based gifts

A former professional rugby player, Séverin Prats wound his career down following numerous injuries. A graduate in sustainable development management, he worked for a few years in the recycling sector, on a national scale. His awareness of responsible consumption became even greater. One day, he was wanted to give a colleague a ‘zero waste’ gift for a farewell party, without buying anything new. Impossible to find anything suitable. “I said to myself that there should be a gift card available that can be used in recycling centres and other sustainable consumption shops. The traditional players in the multi-brand gift card sector only list major brands and nobody from the social and solidarity-based economy”. And that was the trigger. ” I didn’t want to be an entrepreneur; I was in a comfortable situation” he says and went through a lot of stages before really making the commitment. “But something really needed to be done, and I knew that if I didn’t do it, I would feel bad about it. In the face of the coming ecological crisis, I didn’t feel I could not contribute. And what would I have told my children when they asked me about it. The project wasn’t too huge, so I went for it”.

Surround yourself with people, work as a group and get started

With his past in team sports, Séverin has a taste for cooperation and relies on the SCIC status, allowing all the stakeholders of the project to make decisions together regarding the strategic orientations that Ethi’Kdo would take, to become involved and to help him find his bearings in this new sector. “It was necessary to create a network of stores, both online and physical. I wanted the card to be valid for making donations, to be physical so that it could be passed from hand to hand, but also digital, to rise to all the challenges. There was no system available for making a multi-brand digital card that could be used directly in the store. This is the really innovative technical aspect of the project. You can pay just like with a classic card with our gift card. To achieve all this, I needed lots of support”. Officially created in April 2019, the company completed its first financing session in July 2019, having attracted support from various parties such as Bpifrance, Les Cigales, La Nef, the city of Paris, the participatory financing platform Ulule and PIE (France Active Paris). On 15 November 2019, 18 months after the initial idea, Éthi’Kdo launched the first 100% ecological and solidarity-based multi-brand gift card to the general public. “Being supported was essential, if only to ask the right questions. PIE* got us thinking about our fundraising. We then went through the France Active seed fund, which helped us to develop, to see the bigger picture and also to unlock other funding. Thanks to this programme, several innovations were launched, including the échoppe de la Transition, and to experiment with the distribution of our cards in bulk shops, physical shops and concierge services. I don’t think we would have done it without France Active”

Responsible consumption, from marginal to the norm?

The organisation is approaching shops so that it can offer payment by Ethi’Kdo card. The aim is not to have as many sales outlets as possible, but to offer payment in an ethical shop throughout France. “Most of the products we offer are provided by structures financed by France Active. It is not surprising that committed stakeholders in this area are working together and pushing in the same direction: responsible consumption, healthy development in an ecosystem that feeds off each other’s successes”. It will only become more popular. “We are the only ones offering a gift card with 100% responsibly sourced products. We fight against greenwashing, we put ethics at the heart of the model, we offer donations”. There is no doubt that responsible consumption will continue to be an important part of our choices.