President and Director of the Espace Magnan

When the association was at a crossroads, the France Active coaching was a real springboard. 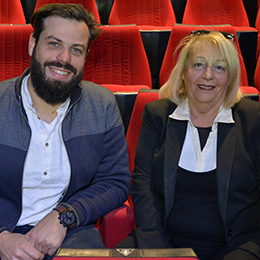 Creating the cultural and social heart of a neighborhood

Recreating a sense of community

Everything could have set them at odds with each other, she the southerner from Marseille and he the northerner who grew up in Tours. And yet, they have one thing in common: their fierce desire to animate the cultural and social life of the Magnan district, in the west of Nice, which is so popular and vibrant. Nicole Venturelli discovered it fifty years ago when she met her husband, who was originally from there. Since then, she has constantly created opportunities for sharing and exchange to help re-establish links between the district’s inhabitants. She created her own association, chaired the neighbourhood committee, and five years ago became chairperson of Espace Magnan.

Alexandre Vandekerkhove, for his part, began his career as an animator in this cultural and leisure centre, which hired him ten years ago on a subsidised job. At the time, his task was to coordinate the youth services. Little by little, he immersed himself in the DNA of the association and the specificities of the region he was discovering. After further training in 2016 to master the managerial and budgetary aspects, he took the plunge and became director of the Espace Magnan in 2018.

“This desire to create a sense of community, to open up to each other, is really what unites me with Alexandre,” confirms Nicole Venturelli.

A difficult period in the mid-2010s

Formerly a youth and cultural centre, the Espace Magnan story has been unfurling for more than half a century, always with the same vocation of popular education. Today, with its team of about twenty people, it is able to offer its 2,000 members sixty activities (fitness, music, English classes, etc.), as well as shows (theatre, dance, concerts), cinema, photo exhibitions, socio-cultural mediation, etc

But this story has not always been a smooth one. Indeed, since the middle of the 2010s, it has had to face major upheavals and obstacles: changes in school hours that put an end to the Wednesday morning activities, an area that lost its status as a Priority City District following the redefining of regional boundaries (resulting in a loss of 60,000 euros in subsidies), reduction in support from the CAF and local authorities (100,000 euros less financial support from the city of Nice between 2017 and 2018), etc. “This wave has overwhelmed all the structures in the district. Of the fifteen or so existing local associations, very few have survived. The Espace Magnan has held on thanks to the plurality of its activities,” explains Nicole.

Support for change to build the future

When Alexandre took over the management of the structure in 2018, the deficit reached 60,000 euros. “We had to make some difficult decisions, including three redundancies. We also had to lay new foundations for the future,” he explains.

At the beginning of 2020, France Active’s support also became manifest through a €60,000 “relève solidaire” loan, part of the ESS’OR scheme supported by the PACA region, to consolidate the cash flow impacted by the projects already undertaken before the health crisis and to prepare for new activities. “A helping hand arrived just before the health crisis, to renovate the building, create a climbing wall, and also to invest in our programming and our artistic education projects”, specifies Alexandre. This momentum was of course slowed down by Covid, which forced Espace Magnan to drastically reduce its activities. But with these new foundations laid in advance, “we are ready for the next step!” says Nicole Venturelli.

from a "relève solidaire" loan of